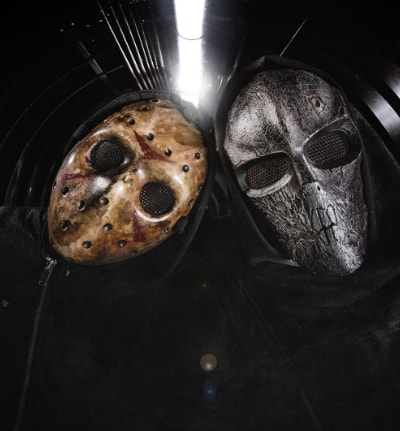 In a world where most of the music sounds the same and every producer is the carbon copy of eachother, Luca Lodi and Simone Sighinolfi aka Hallucinator, came tobreak the rules.
A career developing since 2007, proposing their uncompromising signature sound and ranging from hard neurofunk to hardcore, metal and everything in between, their pride is driven by having their own identity and not following a particular style. Always favouring quality over quantity, nonetheless the body of work looks astounding already.
The masked duo counts several releases on many prestigious labels such as EMI, PRSPCT, Yellow Stripe, Forbidden Society, Brutale (to quote a few), worked together with names like Gridlok, Counterstrike, MC Coppa, The Outside Agency, Andy the Core, The Sickest Squad.
Definitely not the usual dj set, their show is highly energy infused and gets perceived as a live band concert. A unique approach that made them headline several shows around the globe and on the biggest festival stages, like: Let it Roll, Beats for Love, Boomtown, Imagination, Decibel, Hardshock, Q-Base, PRSPCT XL and many more, always leaving a mark and schocking crowds in every performance.
Pioneers of mask wearing since ten years into the scene, long before it became a glamorous bandwagonist gimmick, they give birth to worldwide recognized anthems like "Raise Your Middle Finger", "Resist" or the metal influenced "Fuck The System".
End of 2017 and beginning of 2018 see Hallucinator step it up once again, on one side experimenting on 200bpm with the release on Brutale, and on the other side with their second album "Iconoclasm", forthcoming on the mighty PRSPCT Recordings, which will bring it back to their Drum and Bass roots.