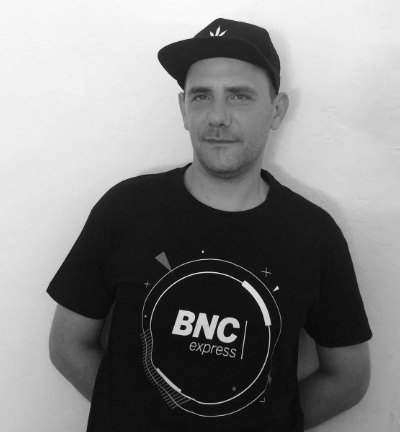 BNCexpess label owner, Promenade has built his reputation through DJing, thanks to both his technical ability behind the decks and the versatility of his sets. His journey into drum’n’bass has been started in 2002 and for almost the next 5 years his activi- tes was focused on djing. During 2007, alongside dj DP, Promenade has started a new project: G Recordings. Besides headlining alongside some of the best djs in the world, Dp&Promenade’s releases on G Recordings and Chronic have been repeatedly played by artists such as Roni Size, Aphrodite, Dillinja and Brian G, whilst also making frequent appearances on radio shows such as BBC 1 Xtra ans Kiss Fm.

On 2011 comes the creation of a new project, BNCexpress, a label with which Promenade aims to bring together young Italian producers to create a new, smoother, more funk orientated sound. The participation of so many people from so many different musical backgrounds gives the project a fresh sound and a diverse outlook towards making music.

Since establishing his BNCexpress label in 2011, Promenade’s sound has taken on a unique char- acter: helped along the way by the stimulus and collaborations of many producers he has created a stylish and defined sound, drawing on other genres such as Funk, Hip- Hop, Soul and Pop to create his own refined style of Drum & Bass, full of references to these genres but always attentive of the public on the dancefloor.

From 2014 he has launched a side project together with dj Trupak:  Control Change’s bootlegs and tunes for BNCexpress have thousands of listeners on their sound- cloud pages and on youtube as well. In 2014 their remix “Good To Me” from Richard Grey was out on G High records (Los Angeles). Control Change has been put also for: Liquid Flavour (Brasil) and Singularity Audio.

He has also played a lot on the intenrational circuit: Uk, Spain, Czech Repubilc, Germany, Poland.